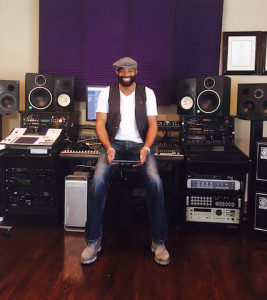 Los Angeles, CA — September 2016… You can tell when you hear his music that musician and producer Pablo Stennett puts heart and soul into everything he does. The multiple Grammy winning musician/producer’s list of credits is as lengthy as it is diverse, from Ziggy Marley, Jimmy Cliff, and Raphael Saadiq to Willie Nelson, Chaka Khan, and Pink. He’s got an ear for detail and his reputation depends on great sound. And in his studio, he relies on Mackie’s award-winning DL32R 32-Channel Rackmount Digital Mixer for tracking and wireless mixing.

Stennett has been getting a lot of attention lately for his recently completed project with up-and-coming singer Emree Franklin. Her new single, We Are Tomorrow, has met with critical acclaim. As with most of his own productions, the project was recorded at Stennett’s personal studio in Southern California, tracked and mixed on his DL32R.

“Mackie gear has always been at the heart of my studio,” Stennett observes. “I recorded on a 32-channel Mackie 8•Bus analog mixer for 20 years, and made a whole lot of records on it. I loved that mixer. But now I’ve switched to the DL32R, and it’s been at the core of everything I produce. I can track a group, add live instruments, then pull it into the computer, add virtual instruments, and mix—all with the DL32R. It has all the features I need, and I love the sound.”

Stennett brought his production and multi-instrumental chops to collaborate with Franklin on the original tune “We Are Tomorrow,” using the DL32R as a hub for connecting it all. “Everything in the studio is patched into the DL32R, including my vintage keyboards, my outboard gear, and my computer DAW,” he explains. “From the mixer, my audio is routed to a Mackie Big Knob, which controls my Mackie monitor speakers. I control the DL32R with the Master Fader app for iPad. So it’s a Mackie system from end to end.”

To see just how good the DL32R can sound, check out Emree Franklin’s new single “We Are Tomorrow,” produced by Pablo Stennett and available online. For more info on Pablo Stennett, visitwww.pablostennett.com

Emree Franklin and Pablo Stennett, “We Are Tomorrow”